11 Ruby Camp Area from the Range

One of the guests has failed to make the connecting flight from Brisbane through Sydney to Alice Springs (there has been thick fog in Sydney and all flights have been affected), and the usual bus has broken down.

Sandrifter Art Tours take this all in their stride and hire a bus locally to transport 17 guests (1 to follow) the 135kms east of Alice Springs to Ruby Gap National Park, or as far as the bus can travel on outback roads, before transferring to 4WDs – a Land Rovers, Toyota and a pickup for the remaining hour into Ruby Gap National Park.

The end of the macadam road 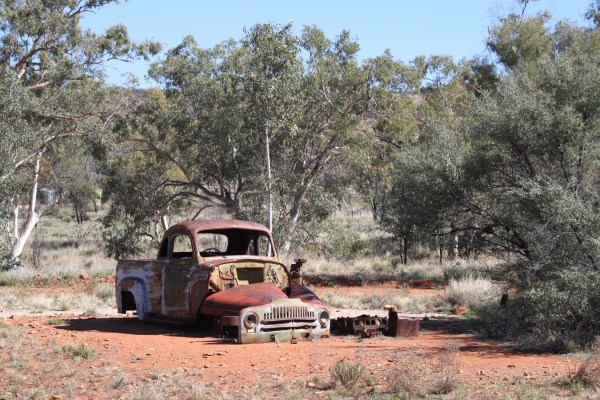 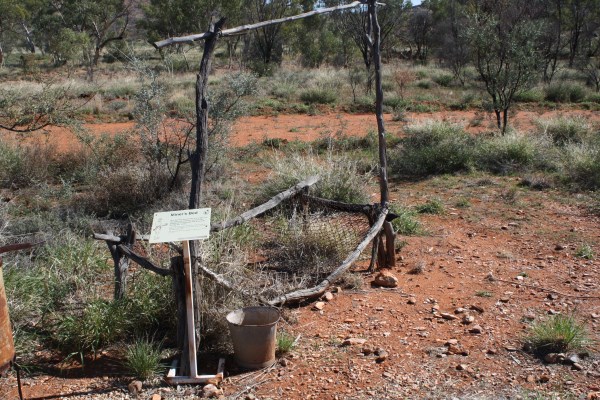 We make the rendezvous on time and await pickup for the final leg to camp.  As we wait at the lookout and survey our surroundings; it is the hot, dry crunch and crackle of every twig and blade of grass that I am struck by the most.  There is not a hint of moisture anywhere!  It is as though every molecule has been wrung out of the air, and then hair-dried to make sure.  Flies soon find us, as they search for the slightest hint of moisture. There are other signs of life, and we hear a few bird calls and see wild flowers amidst the thirsty green spindly shrubs and grasses. 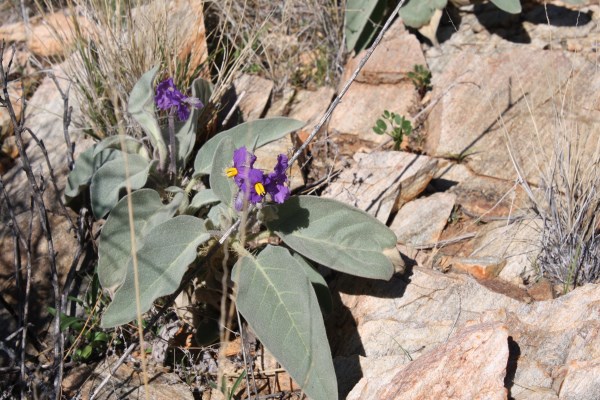 We are collected by Gerry and Corinne, and driven to find a place for lunch, that turns out to be a dried riverbed. It is a chance to reflect on the environment we are moving into – the inhospitable wildness of the place is almost palpable.  It is saying, ‘take one wrong move here and it’s over!” 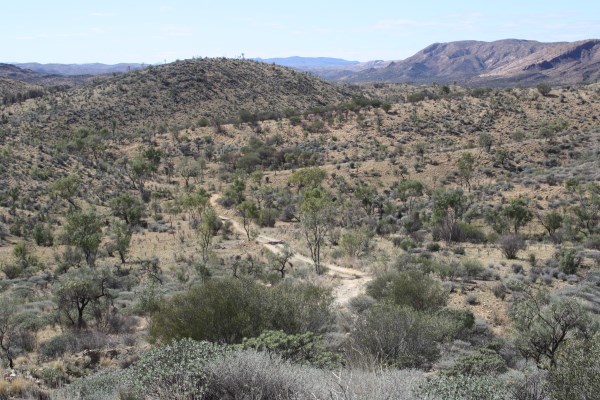 View from the lookout 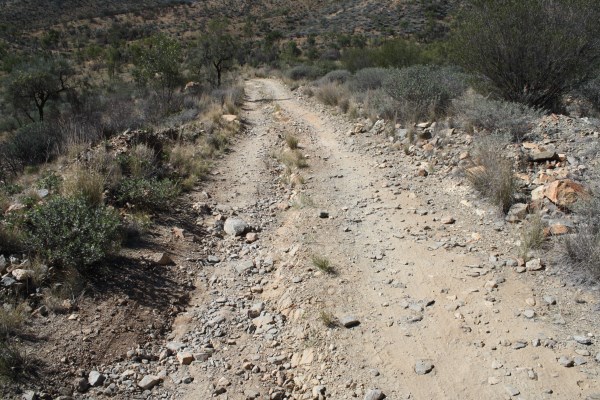 The Road to Ruby Gap

The drive into camp was memorable for being some of the rockiest, sandiest, most corrugated, weather beaten and eroded roads I’ve ever experienced. 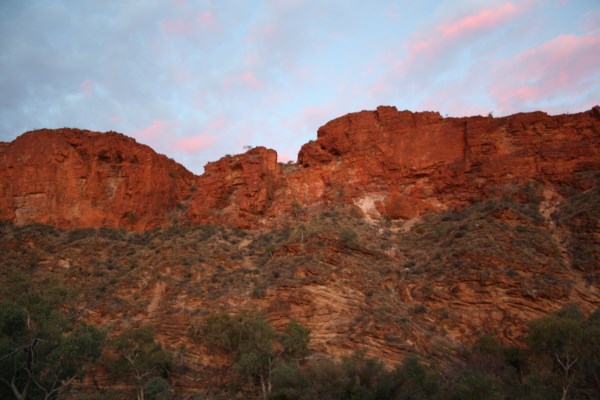 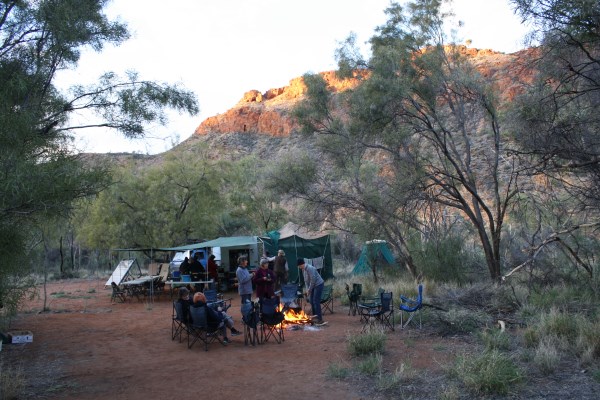 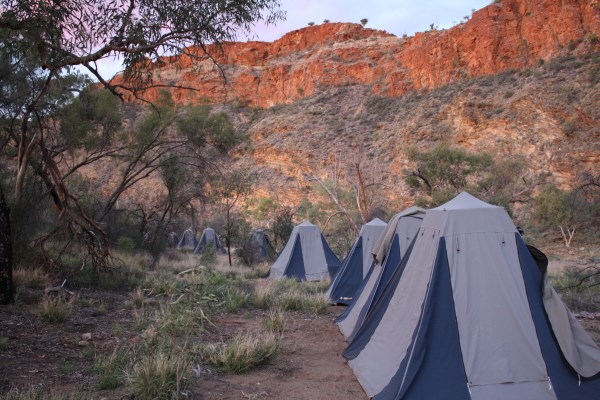 Camp is set up when we arrive, with shade cover over the kitchen.  There is a green tarp on the other side of the track, about 30 meters away, that are the loos, and a large area of grey ash that is our camp fire.  It will warm us, heat our water, feed us and entertain us at night and warm and feed us when we awake in the morning as it is very cold in the desert at this time of year. 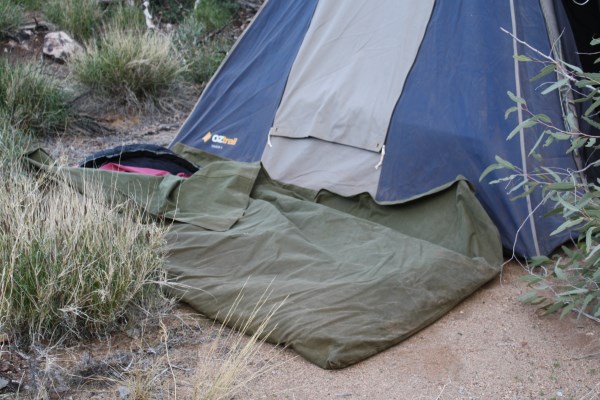 I spend the first three nights under the stars in a ‘swag’, and only a persistent runny nose and the bright moon keep me from sleeping out every night.  Def: Swag (bedroll), an Australian bedroll.  What a great experience! It consists of heavy canvas, folded in half long-ways, and sewn at one end to form a folio-type pocket, into which a thin foam mattress and sleeping bag is inserted.  It is actually very comfortable, and with a beanie to keep my head warm, I sleep well.  I wake up a couple of times to see three shooting stars at various times; one of which seems to travel slower than the rest and leaves a long tail over the whole breadth of the sky. 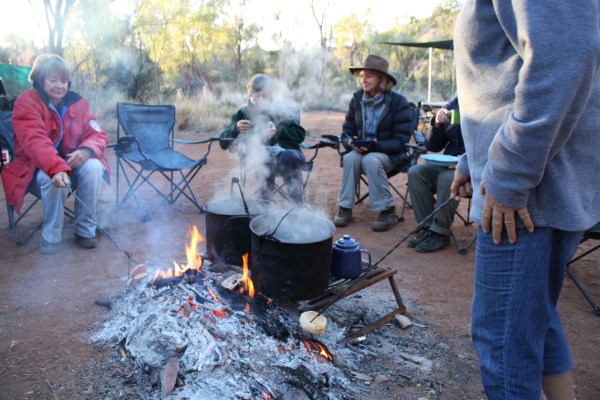 In the morning, the fire is lit and others have gathered with porridge in bowls, or bread, or crumpets on the end of toasting forks.

The first introduction to our area is given by Gerry, the co-owner of Sandrifter Art Tours, and we are taken up a low hill behind the camp and shown several plants and told their health, healing or otherwise beneficial properties. Gerry is such an entertaining story-teller and he stops at each bush to tell us a little about it, including its Latin and common name, and what the aboriginals use it for; everything from antiseptic and healing properties, to an alternative type of pepper, for the witchetty grubs he showed us.

We spend the afternoon organising ourselves and settling into our new life under canvas for the next eleven nights. 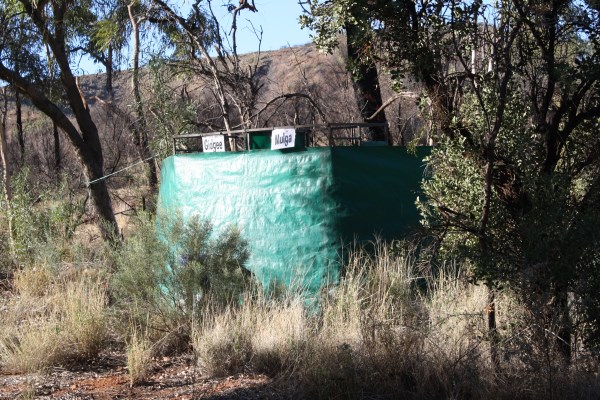 There is a slight sprinkle of rain in the night, just a few small drops apparently, and I wake with a wet neck and wonder jokingly if a dingo had peed on me.  It was either rain or dingo. 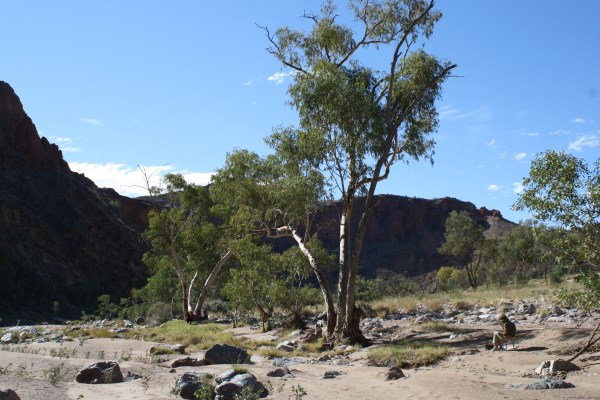 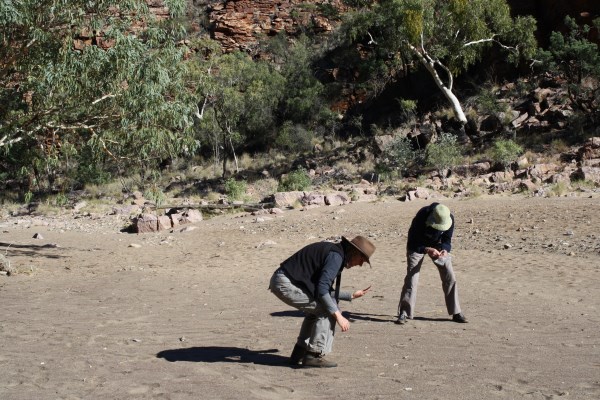 Looking for Garnets in Hale River 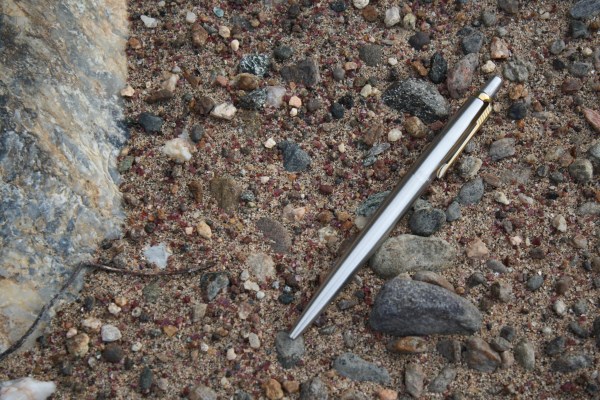 Garnets are all over the dry Hale River bed 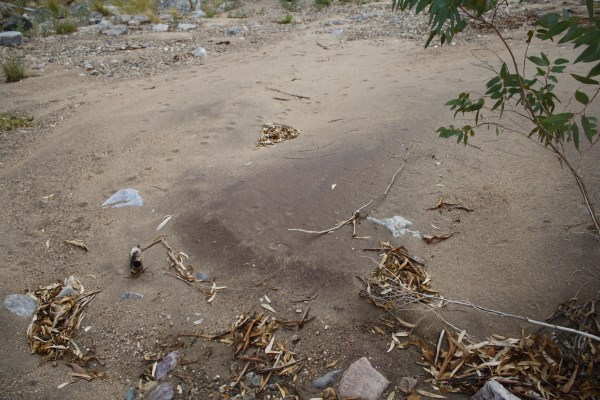 These garnets are virtually worthless and are lying all over the dry river bed in clusters or on the surface as fine garnet sand that gives areas a deep purple hue, and whenever I rest from painting, I fossick for Garnets.  In March 1886, explorer David Lindsay found what he thought were rubies in the bed of the Hale River. By May 1887 there were over 200 people in the area prospecting for rubies. By then gold had been discovered in the creek near Paddys Rockhole, 45 km to the west, which led to the establishment of the Arltunga Goldfield.  At the beginning of the ‘ruby’ rush European buyers were keen, but as the market was flooded, buyers began to question their quality. By June 1888, it was found that the stones were merely high grade garnets, not nearly as valuable as rubies. Central Australia’s ruby boom quickly collapsed. 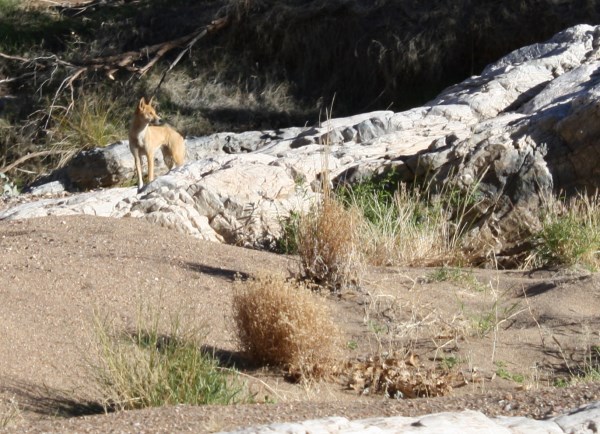 We see a lone Yellow Dingo on a rocky outcrop on our way back to camp and I wonder how he finds enough to eat.

The meals provided for us are excellent!  Breakfasts are usually porridge, and sometimes Corinne does scrambled eggs, or Gerry cooks fantastic bacon and eggs. Lunches are either a very full sandwich of salad and cold meat, or a very inventive salad of lettuce, tomato, cold meat, nuts, fruit and other goodies. Dinner round the camp fire is made up of two courses, alternating first and main, then main with dessert that include camp-made pumpkin soup, roasts of lamb and beef, BBQ, curry, stroganoff, pasta and so on. 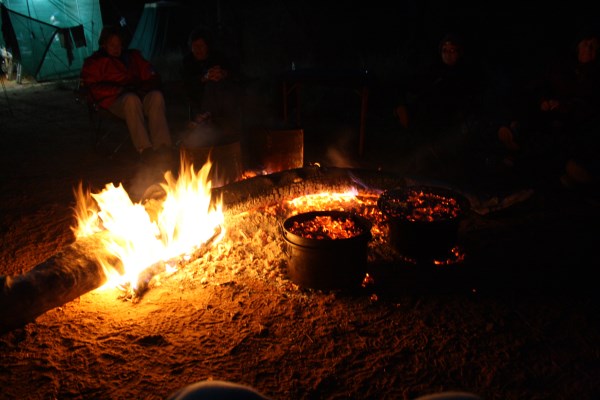 A huge log on the fire and two Camp Ovens with hot embers in the lid in the foreground, doing roast veg and a lamb roast.

Hale River is dryer than Gerry has known it, and water is one of the things brought in with us in five large drums in a trailer.  Our showers therefore must be rationed to one 9lt bucket every other day, until more water can be found.  There is water under the sand below our camp but five foot down and too deep to be effectively pumped for shower use (the sand is damp just inches below the surface, even in all this dryness) so there is water to be found, if you know where to look.  The shower is ‘Gerry built’, with a pump and heating element.  The bucket of water is poured into a reservoir in the compartment which is pumped through the heating element to the shower.  It is a brilliant piece of homemade mechanics and typical of inventive Gerry.  They needed an urn once for teas and coffee and after looking around camping shops, Gerry said I’ll build one and took an old cooking pot, drilled a hole in the base, attached a tap and constructed a gas fired holder for it to sit in – works better than any shop bought urn and has three elements for superfast water-boiling, for emergency cups of tea.

We are told that the aborigines would never come to Ruby Gap until everything had died on the plains and then, and only then, would they retreat to the gap (where food and water could be found).  Ruby Gap was considered last ditch for survival. If the easy pickings of the gorge were depleted in times of plenty, there would be nothing for times of drought and famine. They also felt vulnerable to attack from other groups in the close confines of the gorge, and preferred the open planes.

One day we do a long walk up the Hale River to Ruby Gap and Glen Annie Gorge, where we find water, both in the gorge and on the way.  Gerry organises to refill our drums so that we can be a bit freer with our showers. 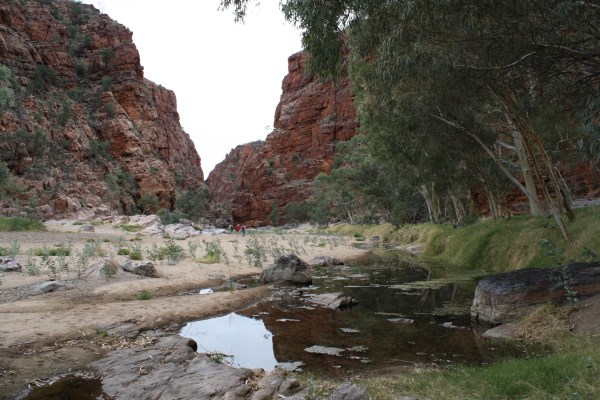 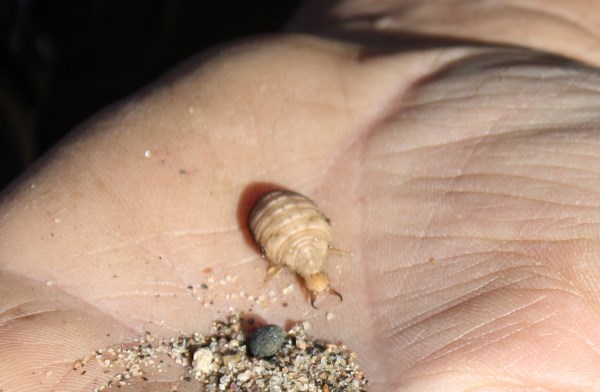 There is evidence everywhere of bush fires and plenty of charcoal for drawings if we want it, which leave black lines on clothing as we walk through.  Apparently the whole area burned in September, and is only just starting to recover.  The river bed is covered with young shoots and new growth, but most of these will be swept way in the first rains when they come.

One day I walk to the top of the escarpment.  I just want to rest my eyes after days of being in the gorge, and see what is out there on the horizon.  I take water and Gerry gives me a handheld radio for communication in case I get into trouble. The climb up is steep with loose rock and shale. I get to the top and stand admiring the view.  It is like a breath of fresh air. 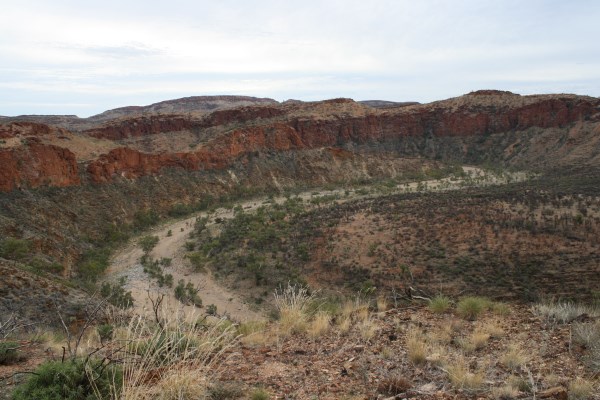 Hale River from the top of the Range 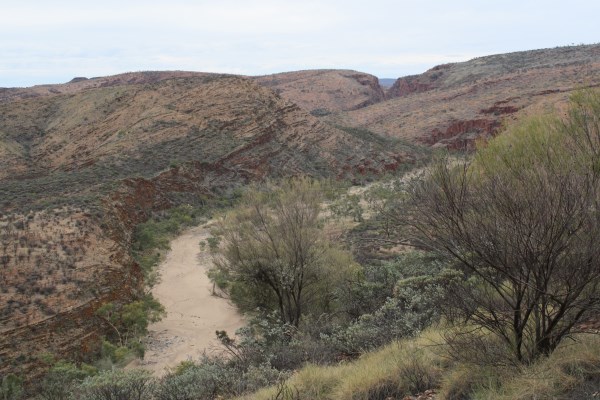 Hale River and Glen Annie Gorge in the distance

The View West from on top on Ruby Gap Range 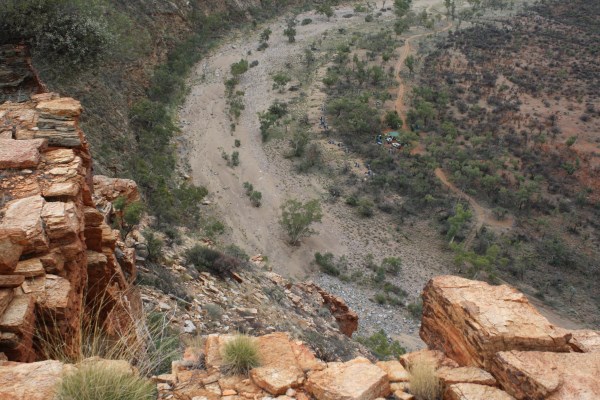 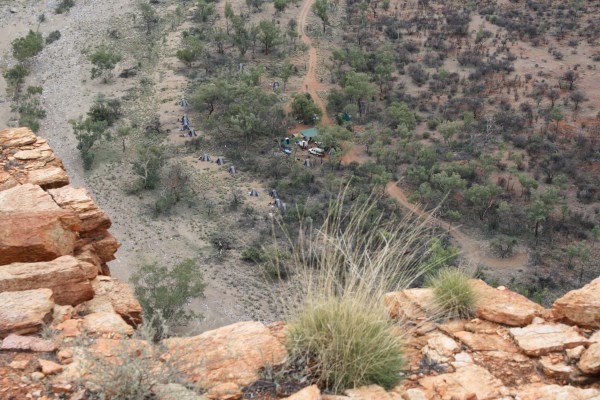 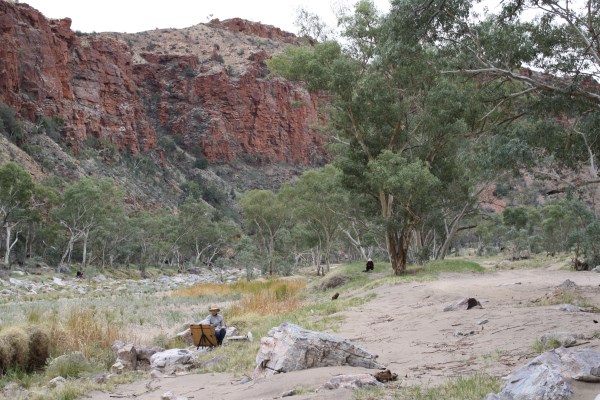 So we paint most days, fossick for garnets, chat round the camp fire, and soak up Gerry’s wisdom and knowledge about the area’s geology, fauna and flora and even astrology. There is no end to his knowledge, gleaned from over 40 years in the business. 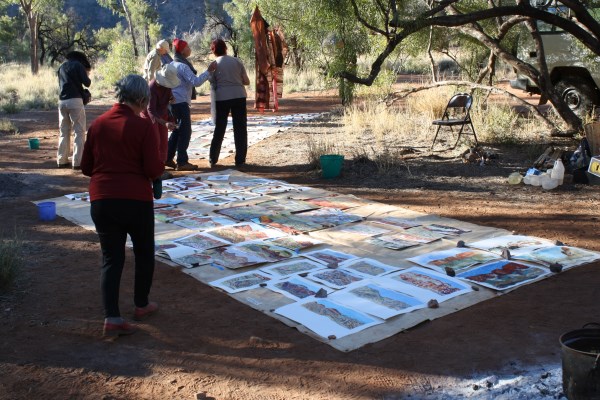 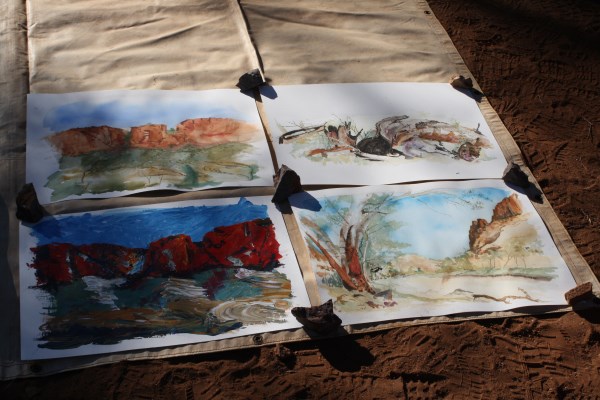 Four entries by yours truly

And then it is the end, we have a final ‘show and tell’ of the work we have produced, in the open air, on a couple of large tarpaulins. This is The Ruby Gap under Canvas Gallery Joint Exhibition 2013, and will appear in all our CV’s as such. 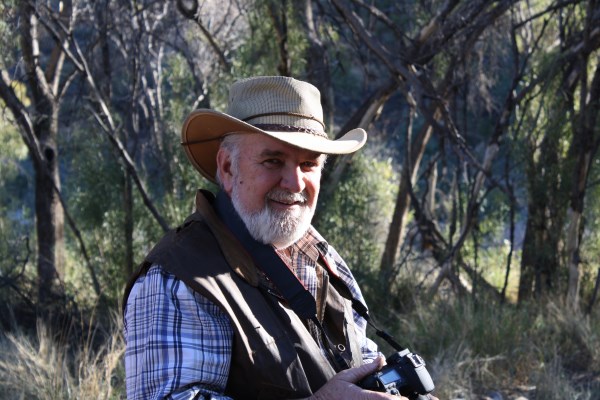 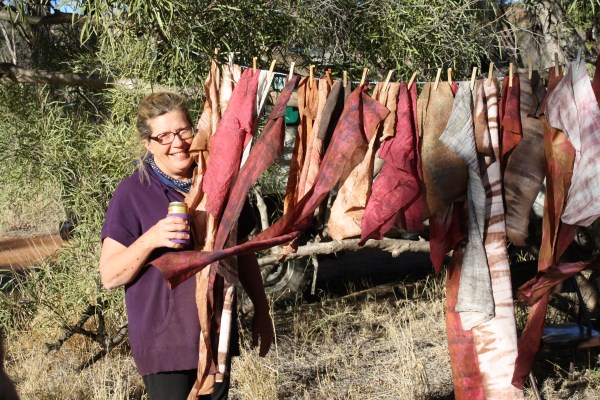 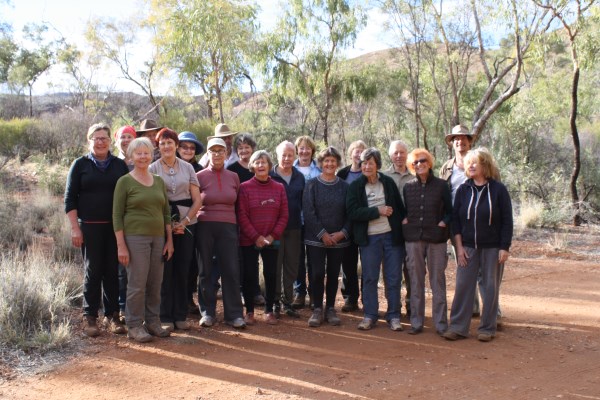